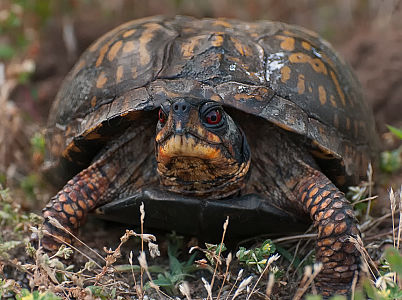 Tracking turtles isn’t as easy as one might think, but HCT volunteer Michael Musnick, a passionate amateur herpetologist, is doing his best.

Holding an antenna and receiver, Musnick sets off down one of the grassy trails leading from the parking lot of Harwich Conservation Trust’s (HCT) Robert F. Smith Cold Brook Preserve in Harwich Port.

On the Preserve’s 66 acres, somewhere, hides a female Eastern box turtle (Terrapene carolina). Warm wind rustles the dense bayberry bushes alongside the path. A dainty American copper butterfly adds a splash of delicate color to some queen anne’s lace as honeysuckle and wild rose blossoms perfume the air. A red-winged blackbird cries out a warning as Musnick and those with him pass. If Musnick is aware of any of this, he gives no sign, as he completely tunes in, listening and watching for the turtle he’s tracking.

“Listen.” Musnick stops. “You can just hear the signal.”

A faint beep pushes through the crackle coming from the receiver. He pivots right and the beeping fades, left, just ever so slightly the sound is louder, and off he goes, following it.

Musnick, who has a state license to study box turtles, attached a transmitter to her shell in late June. The turtle is the first of three discovered in a newly launched tracking study being conducted by the Harwich Conservation Trust. But Musnick, and HCT Executive Director Michael Lach hope to change that. With the help of those using the trails at the Preserve, Musnick hopes he can find more turtles to tag. 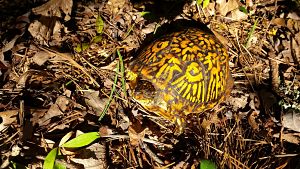 Musnick’s work at the Preserve will help inform the planning for the Cold Brook Ecological Restoration Project, explained Lach. The restoration project goals are to enhance wildlife habitat, water resources, and the visitor experience by restoring wetland, stream, and other habitats to the long since retired bog complex in Harwich Port. By understanding box turtle movements, hibernation spots, and estivation areas of the Preserve, the eco-restoration team comprised of HCT, Town consultants, State Division of Ecological Restoration, and the U.S. Fish & Wildlife Service can better protect the shy yet charismatic box turtles that call the Preserve home.

“With the box turtle tracking project HCT can continue to support and protect this state-designated rare species,” Lach said.

The Eastern Box turtle has been named a Species of Special Concern by the state.  Box Turtles are not aquatic, but instead live in a diverse set of habitats, including woodlands, fields, and thickets. Many threats face the small turtle, but perhaps the greatest is the destruction of habitat due to development, and all the attending problems – pesticides, roadways that crisscross turtle travel routes, and pets turned predators. 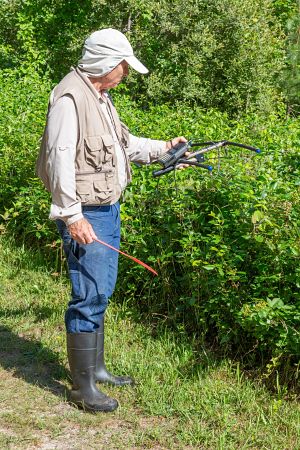 Finally, Musnick hones in on the turtle’s location in a brushy area. He explains she has been in the same place for several days, in all likelihood estivating, a kind of warm-weather hibernation in which the turtle regulates her temperature against the summer heat.

Musnick, a retired cabinet maker who moved from Mahopac, New York, to Cummaquid, has a long history of tracking turtles to help with their protection.

“I started without the aid of transmitters in 2003 at a box turtle site and two wood turtle sites,” Musnick explained. “In 2006 the Friends of the Great Swamp of Patterson, New York funded the purchase of some transmitters, a receiver and antenna. I switched all my efforts to tracking wood turtles and it wasn’t until about 2010 that I began to find and identify a productive box turtle site.”

Asked how he first became interested in turtles, Musnick pauses for a moment before answering.

“I guess it was when I was a kid. Finding a baby turtle. That tiny face, those little legs,” he said, holding his fingers in a circle to indicate the size of a baby turtle. “Who could resist that?”

Musnick’s work in New York included collaboration with the Metro North Railroad to develop gravel escape ramps to help turtles stuck between the railway’s tracks. The work, which was quite successful, was featured on National Public Radio (see a link below to NPR’s video of his turtle bridge project). Musnick has also developed different exclosures that keep predators from turtle nests.

Musnick got involved with HCT’s project after hearing about their 2019 campaign to preserve the final parcel of land tucked next to the Coy’s Brook Woodlands Preserve. He donated funds and offered HCT his turtle tracking expertise.

“We chatted, Michael talked about his turtle tracking adventures in New York, and offered to volunteer. It was a great fit with HCT to help us learn more about our local box turtles and their favorite conservation areas. Besides, box turtles channel the curious inner kid in so many folks,” said Lach.

The focus of the box turtle tracking project will be to locate, tag, and study box turtles at the Robert F. Smith Cold Brook Preserve, Cornelius Pond Woodlands, and Sand Pond Woodlands. The long-term goals are to identify habitat areas that need protection — open, unshaded nesting areas, and the paths the turtles use to reach nesting areas as well as hibernation and estivation sites.

The box turtle, roughly six inches in length with a shell that looks as though the yellow sun has spattered a shade dappled pattern across it, is the longest living North American turtle. It is so named for its ability to tuck in head and legs and close up its shell like a box. Some individuals have been estimated to live as long as 100 years.

Their movements in a chosen habitat can range up to a square mile. The turtles tend to nest at dawn and dusk, but also might wander about if the day isn’t too hot. Space and time make finding the turtles challenging. And for that reason, help is being sought from the public by those who visit HCT’s conservation lands.

“Box turtles tend to avoid mid-day sun on hot days since they are poikilothermic,” said Musnick. Poikilothermic, also known as ectothermic, means that animals like most reptiles (including box turtles), amphibians, and fish have an internal body temperature that varies according to the temperature of their surroundings. In other words, if it’s a hot day, then a box turtle will seek shade to cool off. If it’s too cool, then it will seek sun to warm up. In contrast, birds and mammals are endothermic, meaning they can maintain a fairly consistent body temperature relative to their surroundings.

Because Musnick lives on the upper Cape, Lach encourages people to call HCT’s box turtle hotline when they find turtles (see below for “How You Can Help”). Since most folks carry a phone, HCT asks people who discover a box turtle to stay with it and call the box turtle hotline. A volunteer with HCT will respond and quickly meet the person who is standing watch over the turtle. The HCT volunteer will then take over until Musnick arrives.

Musnick is one of many volunteers who donate hours upon hours of time, and years of expertise, to HCT’s efforts.

“I’m always inspired by the diversity of life experiences and expertise that HCT volunteers bring to this special corner of the Cape,” Lach noted. “They make a difference every day through HCT’s land-saving and land stewardship endeavors.”

Musnick with his turtle tracking experience in New York, Lach noted, is yet another great match for HCT’s efforts to preserve local land and habitats for native species. 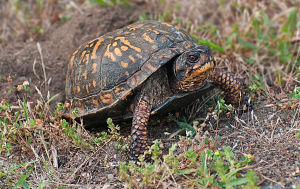 How You Can Help

If you find an Eastern box turtle at the Robert F. Smith Cold Brook Preserve, Sand Pond Woodlands, or Cornelius Pond Woodlands, please take a photo and text it to 508-469-9174. Please remain with the turtle and a volunteer with HCT will call you back shortly. The volunteer will then meet you on site and tracker Michael Musnick will also join. HCT is tracking turtles using small radio transmitters, permitted by the state, that are attached to their carapaces (top shell) without harming the turtles. The information in this study will inform future management of local conservation lands to help protect box turtle habitats.

To find driving directions and trail maps for the three box turtle focus areas, please click each of these Preserves: