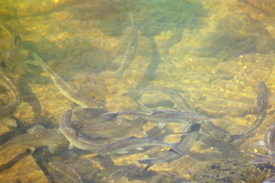 Each spring, the river herring return to Massachusetts’ rivers and streams as sure as the sun will rise. The annual spring migration of river herring, alewives and blueback herring, from coastal waters through rivers and streams to their spawning ponds has been a longstanding phenomenon. However, fisheries experts worry that water quality degradation, dams, culverts, and industrial-scale fishing off our shores threatens the very survival of these fish.

River herring are a crucial food source for other fish. They serve an essential ecological function in the energy-dynamics of both marine and freshwater ecosystems, serving to transfer energy from freshwater to the ocean via the food chain when they swim out to sea. While at sea, river herring are prey for many species including shark, tuna, mackerel, cod, haddock, whale, porpoise and dolphin. Largemouth bass, American eel and striped bass consume both adult and juvenile herring in fresh and brackish water.

The Herring River is one of the most significant for spawning Herring in the state. Due to decline, Massachusetts has declared a moratorium on the harvest, possession and sale of river herring in the Commonwealth for through 2011 due to its decline in abundance. Massachusetts’s fisheries scientists have recognized the need for more data on how many river herring are coming back to our ponds to spawn. They developed a protocol for communities to create herring counting programs run by volunteers. With the information that is collected, we can document the relative numbers of herring that migrate up the Herring River and help restore this important species.